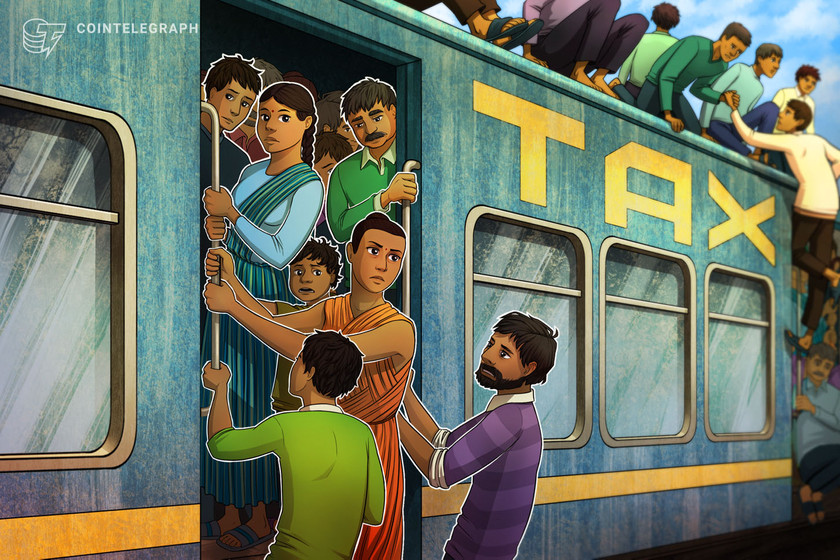 The proposal includes a 30% income tax on crypto returns and a 1% tax deducted at source (TDS) by crypto exchanges on transactions above 10,000 Indian rupees ($133).

The announcement came during the parliamentary budget session for 2022, and the government has already set April 1 as a deadline for crypto exchanges to comply with the new tax regulations.

The introduction of the crypto tax was widely misreported as a form of legal recognition of cryptocurrencies in India — a notion that was debunked by the head of the country’s Central Board of Direct Taxes.

Sitharaman repeated a similar stance to Parliament a few days later, claiming that the government will only tax the profits from digital assets and in no way give them legal recognition. The legality of the crypto market will be decided later after appropriate legislation is introduced in Parliament.

“Banning or not banning will come subsequently when the consultation gives me inputs but then would you rather have me not tax & allow the profits to be there. “

“I will tax because its sovereign right to tax.”

30% crypto tax would do more harm than good

The 30% crypto tax bracket is the highest in the country and nearly double the corporate tax rate of 16%. The announcement saw a mixed reaction from the crypto community in India, with exchanges calling it a welcome step toward some level of recognition of the unregulated crypto market, while many crypto traders called it regressive.

Representatives of Indian crypto exchanges met senior policymakers from the Ministry of Finance to appeal to the government, asking it to reconsider the proposed tax rules.

According to The Economic Times, industry leaders tried to explain that a 1% TDS could deter small traders and also lead to assets shifting to foreign exchanges. The representatives also outlined how difficult it would be to collect TDS on transactions from foreign exchanges with no data to track. The meeting’s discussions brought forward various challenges in implementing the tax without clear regulations.

Despite the government insisting that taxation does not constitute the legal recognition of cryptocurrencies, Sumit Gupta, co-founder and CEO of Indian crypto exchange CoinDCX, told Cointelegraph that the proposal was a landmark move that brings greater legitimacy to digital asset markets. Regarding the high tax bracket and its inherent complexities, Gupta said:

“There have been some discussions regarding the 30% taxation figures, with some suggesting that it is a huge percentage bracket that may potentially deter greater innovation in the sector and serve as a barrier to investors and digital finance users.”

He added, “Besides the high tax rate, there are still gaps in clarity, especially when it comes to tax deductible at source. Specific sections regarding TDS remain ambiguous, dampening greater adoption of crypto. While progress in crypto has been encouraging, we must remember this is just the beginning of crypto’s journey, and we look forward to greater developments on the regulatory front that will serve to grow and support the future of finance.”

Some have claimed that the tax proposal was announced haphazardly, with the government wanting to tax the profits while leaving the losses for the trader to bear. The high tax rate could further deter small traders and make it a market dominated by the rich.

“Such a tax framework indirectly discourages anybody to enter into crypto since a 30% tax, 1% TDS, and goods and services tax of 18% is levied on every transaction (on the brokerage/service fee). This becomes heavy on the pockets as well as very difficult to comply with since, in crypto, there are thousands of transactions per user every month. Previously, before this framework was announced, many paid taxes under the income from other sources under the payable tax slab. Losses, if any, got carried forward. In crypto, a bear market can last for a couple of years, and hence, losses (if any) should be allowed to be carried forward.”

Several nations around the globe have already received heavy backlash from retail traders over high taxation. South Korea had to postpone its 20% crypto tax proposal due to a lack of clarity in regulations, while Thailand had to cancel its 15% tax proposal after backlash from retail traders. The Indian government would do well to note the evolving regulations around the globe in order to introduce a balanced framework.

“India is finally on the path to legitimizing the crypto sector in India. So, it’s phenomenal news for everyone to learn about the GOI’s [Government of India’s] forward-looking approach toward crypto while we deliberate on the finer details as an industry. We believe that potential crypto investors sitting on the sidelines are now ready to access and participate in crypto. Therefore, pioneers in the space want to build a conducive ecosystem for crypto and are collectively deliberating on the implications of the current tax regime proposed at the grassroots level.”

The Indian crypto ecosystem has managed to thrive despite uncertainty over crypto regulations during the past three years. Despite the fact that the Indian government has yet to finalize a draft crypto bill, foreign venture capital firms and crypto exchanges have been eyeing the vast Indian market and its potential to become one of the behemoths in the ecosystem.

Several Indian crypto exchanges have become unicorns (worth $1 billion or more) over the past couple of years, attracting investment from some of the biggest names on Wall Street. However, the recent complicated tax policies could prove to be a damper on their plans. Sogani explained:

“I got a call from one of the top three crypto exchanges in the world, who are considering entering India, but after yesterday’s announcement, they seem to be holding back the idea. Just because of the complexity involved around the taxation of crypto. Clearly, a complicated tax framework will discourage international companies from investing and starting operations in our country. India is a huge potential market for crypto due to the population strength we have.”

TDS compliance and a high tax rate appear to be making it exceedingly difficult for multinational entities and exchanges to set up shop in the country. Crebaco has estimated that around 10,000 young Indians are currently employed by Indian exchanges and crypto-focused businesses. Additionally, Indian coders are receiving many freelance opportunities from all around the world, and government policies such as the new tax rules are starting to encourage “brain drain.”

India’s crypto taxation rules have become a paradox of sorts at this point. On the one hand, bringing crypto under a tax regime gives it some level of recognition; but on the other, the government claims that the legal recognition of crypto can only be determined after the proper laws are introduced. This heavy tax on crypto holdings has only added more complexities for India’s crypto entrepreneurs and traders.