This column’s goal has never been to provide investment advice on cryptocurrencies or other digital assets, nor has it been to provide individualized legal advice. It has mostly been about my desire to freely set forth in writing my thoughts on the state of the crypto market and the legal affairs surrounding it.

Powers On… is a monthly opinion column from Marc Powers, who spent much of his 40-year legal career working with complex securities-related cases in the United States after a stint with the SEC. He is now an adjunct professor at Florida International University College of Law, where he teaches a course on “Blockchain & the Law.”

So let me state the obvious: It has been a particularly bad past two months in cryptoland. Both in activities relating to digital assets and crypto prices. However there are silver linings to consider. And when considered, perhaps readers will gain a greater perspective and not act in a reactionary way with their digital assets or blockchain business. 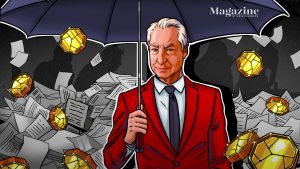 It has been a particularly bad past two months in cryptoland. However there are silver linings to consider.

As I have alluded to in prior columns, I believe Bitcoin, Ether and other cryptocurrencies are here to stay. No one country, or group of countries or regulators, can stop their use and development — nor can a series of failures or freezing of assets by a stablecoin issuer, other large crypto lenders like Celsius, or crypto hedge funds such as Three Arrow Capital which filed bankruptcy proceedings here in the United States last Friday. I also believe, like many blockchain and crypto experts including Dan Morehead at Pantera Capital, that over time, the prices for many of these cryptocurrencies, which are backed by solid blockchains or blockchain businesses, will recover and go higher.

First, there was the complete collapse of the stablecoin TerraUSD — now known as TerraUSD Classic following a rebranding — in early May. When I reported on this in my last column, I cautioned that crypto investors needed to better understand their stablecoin investments’ lack of protection, both in their failure to be tied and backed exclusively or even partially by a reserve currency like the U.S. dollar and by the lack of clear, guaranteed redemption rights in one’s ability to convert the stablecoin to dollars. In addition, there was no government backstop for when the issuer of a stablecoin failed, such as SIPC insurance provided for securities at traditional SEC-registered brokerage firms and FDIC insurance at traditional OCC-licensed banks.

I also made the point in my column’s takeaways from the debacle that investors should not take comfort in other stablecoin issuers with BitLicenses from New York state. That license does not create federal SIPC or FDIC protection for investors in stablecoins issued by the likes of Circle, with USDC, and Tether, with USDT. Moreover, nothing required them to provide redemption rights or be fully collateralized by the dollar.

The response from Congress and regulators

So, what happened within two weeks of my column? A very welcome development. Indeed, it seems that New York State Department of Financial Services Superintendent Adrienne Harris read my concerns and those of others. On June 8, Harris announced new regulatory guidance for BitLicense holders regarding stablecoins. In relevant part, the new regulations require all stablecoin issuers to have their coin “fully backed” by a reserve of assets, which are limited to U.S. government instruments and bank deposits. Equally important, investors must have clear redemption rights into U.S. dollars. Finally, the reserve assets must be segregated from the other proprietary assets of the issuing entity and not commingled with its operational capital.

The New York guidance came a day after another significant event for crypto. On June 7, United States Senators Cynthia Lummis and Kirsten Gillibrand introduced new legislation, the Responsible Financial Innovation Act. This is important in its bipartisanship and the breadth of areas covered involving digital assets. Of particular significance is a provision providing primary regulatory oversight to the Commodity Futures Trading Commission, not the Securities and Exchange Commission, and the effort to provide legal clarity around the Howey test. This is done by defining certain assets that would be deemed “ancillary assets” and reducing their reporting obligations to twice per year. Given the importance of this proposed legislation, I likely will devote another full column to it and its implications. Suffice to say for now, it is an encouraging, thoughtful piece of legislation for the nascent industry that protects it and investors without overbearing regulation and costly requirements.

Finally, it is worth emphasizing a May 3 announcement from the SEC. On that day, Chairman Gary Gensler announced that the SEC would double the size of its newly renamed Crypto Assets and Cyber Unit to 50 staff members. The release notes that the unit was created back in 2017 and has brought over 80 enforcement actions, obtaining monetary relief of over $2 billion. To me this was a clear “land grab” effort by Gensler to assert wide-ranging jurisdiction for the SEC — perhaps aware that the soon-to-be-announced Lummis–Gillibrand legislation would make the CFTC the primary crypto regulator. The release stated that the focus of the unit would be on investigating possible securities law violations related to crypto offerings, crypto exchanges, crypto lending and staking providers, DeFi platforms, NFTs and stablecoins. It seems like that covers pretty much the entire space for blockchain financial uses, no?

What these moves actually mean

As I wrote back in early 2021 when he was initially nominated to be SEC chair, Gensler in my view is ambitious — overly so — and could be dangerous for the industry, as he is focusing on enforcement efforts by the SEC rather than ways to assist the industry in its healthy growth. Even Commissioner Hester Peirce was displeased by this expansion of enforcement staff at the SEC. On the same day as the announcement, she tweeted:

I believe Gensler is, over time, further and further revealing himself to be in the mode of former SEC Chair Mary Jo White, a former criminal prosecutor, rather than a civil regulator. This is not a good thing, in my humble opinion. It’s not good for blockchain. It’s not good for innovation in technology. It’s not good for more efficient, less costly financial services. It’s not good for financial inclusion for all. And it’s not good for those citizens in parts of the world where their governments are corrupt, repressive or irresponsible and they need to protect the value and ownership of their assets and wealth without government interference or involvement.

Marc Powers is currently an adjunct professor at Florida International University College of Law, where he is teaching “Blockchain & the Law” and “Fintech Law.” He recently retired from practicing at an Am Law 100 law firm, where he built both its national securities litigation and regulatory enforcement practice team and its hedge fund industry practice. Marc started his legal career in the SEC’s Enforcement Division. During his 40 years in law, he was involved in representations including the Bernie Madoff Ponzi scheme, a recent presidential pardon and the Martha Stewart insider trading trial.

The opinions expressed are the author’s alone and do not necessarily reflect the views of Cointelegraph nor Florida International University College of Law or its affiliates. This article is for general information purposes and is not intended to be and should not be taken as legal or investment advice.